A Millbrae native, Debbie attended Millbrae's Elementary Schools, Taylor Middle School, and Capuchino High. She and Dave were married in 1992, and are extremely proud of their son, Hank, who is attending the University of Oregon.

An employee at United Airlines in SFO since 1978, Debbie has dedicated her time at several charitable events for her work: she coordinate the annual American Cancer Society's Daffodil Days for more than 20 years; participated in charity Golf Tournaments to support the Boys & Girls Club; and became an elf at United's annual Fantasy Flight where terminally ill children and their families are treated to a short flight before landing at an SFO gate that is decorated like the North Pole.

Debbie's Advancement Chair position for Millbrae's Boy Scout Troop 355 was of her most rewarding volunteer experiences. She is grateful for having the privilege to participate in the growth and achievements of the Scouts; particularly bursting with pride when attending their Eagle Court of Honor.

Mills High School filled Debbie and Dave's lives with volunteerism while Hank attended. Much of their time was spent with the talented students, staff and devoted parents of the Drama Guild and Music Parent Group to support the Bands, Orchestra, and actors of the Performing Arts. Debbie joined the Millbrae Community Foundation in 2011 when she accepted the secretary position.

She has truly enjoyed working with the Board of Directors to help improve the lives of her community and hometown. One of her greatest joys is when a Grant Request can be answered with a check from the MCF, which is made possible by generous donations. 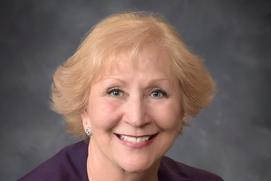