Mary Vella Treseler was elected Millbrae City Treasurer in November 2001 and re-elected in November 2005. She served the City as a member of the Constitution Bicentennial Planning Committee from 1986 to its sunset in 1991; In 1987, received her certificate for completing the Television Commercial Acting Workshop from John Casablancas, Elite Model Training Center in SF and appeared in TV commercials and various fashion shows. Past President of the Millbrae Newcomers Club 1988 to 1991; Millbrae Beautification Commission, presently known as the Community Preservation Commission from 1989 to 1997; City’s Public Access Television Committee from its inception in 1991 to 1996, which then became Incorporated as Millbrae Community Television (MCTV), and served as President from 1999 to 2001. A member of the Mayor’s Civic Coordinating Council since 1989; served on the City’s Smoking Ordinance Committee in 1992 and the City’s 50th Anniversary Committee from 1997 to 1998. Served as President of Soroptimist International of Millbrae-San Bruno 1995 to 1996 and 2000 to 2001. In 2006, she represented the City of Millbrae serving on the San Mateo County Sesquicentennial Committee. Past President of the Millbrae Historical Society from 1993 to 1995; 2001 to 2005 and 2007 to 2009. She received the “Living History Award” from the Millbrae Historical Society in 2008 and continues to serve as their Parliamentarian and also serves as a Docent. She was named Millbrae Woman of the Year for 1999 and has been Chairman of the Millbrae Man and Woman of the Year Planning Committee since 2007. She has served on the Millbrae Community Foundation as a Trustee for the Endowment Fund since 2005.

Following her divorce in 1955 from Joseph Amoroso, the father of her two children, she worked in banking for thirty years, seventeen of those years in Trust Administration. She married Frank Vella in 1958 and was widowed in 1985. Married Robert Treseler in 1990, who at that time, was Mayor for the City of Millbrae and was widowed in 2007. She has lived in Millbrae since January of 1977 and her two children Adonna and Joseph Amoroso attended Millbrae schools. 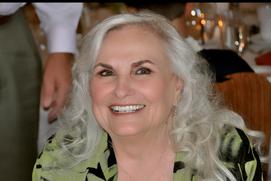